Tamworth look a well resourced club these days. They have a big squad (they currently have six players out on loan) and some experienced performers. That's why they are among the favourites for the title in their league. They were even able to rest some players in their midweek victory.

Certainly not to be under-estimated and AA has ensured that is not the case. I think big-spending Hereford did under-estimate them and before the replay some of their fans were saying they could see it ending only in a comfortable victory.

Should be a good game and a close one, I think. Hopefully our players, backed by a big following, can maintain the levels of performance and commitment they have shown recently and steer us through.
Top

Very excited about today, England playing Australia in the World Cup, vote on Brexit & by far the most important event today Darlo playing at Tamworth. No guesses as to which event is most important? I hope we'll have well in excess of 500 making the long trip to the West Midlands
Top

onewayup wrote: ↑
Wed Oct 16, 2019 12:39 pm
Tamworth aren't pushovers we need to work hard make sure mistakes are kept to a minimum and put our chances away when they present themselves, play to our strengths with commitment high tempo and accuracy, if we do those right we should come away with the win.
Onwards and upwards with Darlington FC.

Agree Dave but I honestly think it’s winnable we are in good form at the moment. Leaving shortly.
Top

LoidLucan wrote: ↑
Tue Oct 15, 2019 12:54 pm
I think the installation of the plastic pitch has affected the view of the goal lines when stood behind the goal. The picture below was taken at the cup match against Hereford and it looks like the pitch is a fair bit lower than the one at the top of the thread which was taken when it was a grass pitch. They must have dug down to lay the 3G and this means unless you are on the fence, the lines will be obscured by the barrier.

They had 1,206 for that cup match, no doubt a big chunk from Hereford. Hopefully they will open up some of the side terracing for our fans as well as behind the goal. 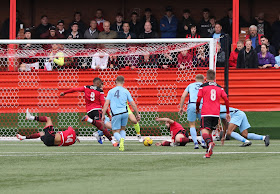 Thats exactly my point, you cant see that goal line at all and you aren't allowed to stand right on the fence as you have to keep the gangway clear.

Reasonably sure I can see people stood beside the fence all the way along the length of that picture.

I think the point I raised was proven again yesterday. Unless you are stood from the left hand side of the goal towards the exit you cant see the touchline, and it gets worse the further across the stand you go. Stewards were there to stop people standing right against the fence.
Top
Post Reply
36 posts