Well since the National League vote has confirmed that is the end of the season, thought we might as well have a review thread: 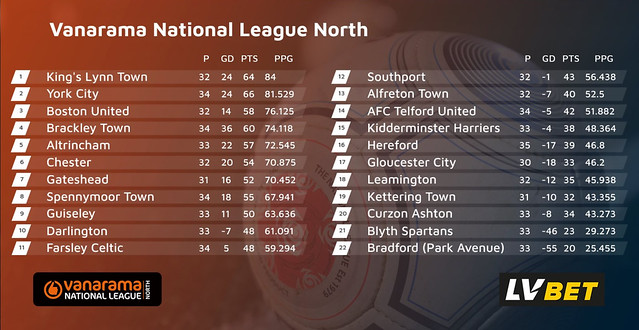 We finish on a PPG points total of 61 a couple behind Guiseley and a couple in front of a Farsley. Needed 70 points for the playoffs this season which is high compared to 65 in 18/19 and 63 in 17/18, however in or first season in this league, Brackley finished 7th on 73 points while we were 5th on 76. Most notable for us is our -7 goal difference much worse than our peers around us in the table.

Best game: Has to be Walsall 2 - 2 Darlington, a game which had everything, haven’t felt like that watching Darlo since the trophy final. As for league games might go for the home win v Boston. Playing an inform side who’d started the season on fire and soundly beat them with a couple of good goals and a solid defensive display.

Best moment: Can’t be anything other than Joe Wheatley’s last minute equaliser. Mentions to Thomo’s 100th goal v Spennymoor on Boxing Day and Donawa’s goal in the 2-1 comeback win at Alfreton.

Best goal: tough call between Hatfield v Kidderminster or Campbell v York. Leaning slightly towards Campbell, something very satisfying about watching the ball go in off the bar. Other honourable mentions to O’Neill for his individual goal v Boston and Thompson for the winner v Blyth.

Best player: it really was the Will Hatfield show this season. But got to say have a lot of time for Liddle and Campbell. Both have plenty of quality and work ethic that we’ll need for next season.

Grade for the season: B+ - we achieved exactly what we wanted, squad restructured, cup run achieved and a top half finish in the league. Only thing that stops it being an A was our ability to self destruct, not quite good enough in both boxes highlighted by our -7 goal difference despite being a top half side. But the foundations have been laid, with the right additions we could certainly be pushing for a playoff place next season (whenever that is).
Top

Best Game- Walsall for obvious reasons. Beating York 1-0 we could of been 3 up by half time against the team who were top or 2nd at the time and didn’t lose at home until that point I believe. Beating Chester 2-0 especially under the circumstances with the whole floodlight shenanigans at half time was a huge win.

Best Moment- Wheatley’s goal, Thommo’s 100th goal, Connells penalty save against Tamworth (Moment I really felt that we would get into the 1st round of the Fa Cup)

Best Goal- Campbell against York is mine, Hatfield against Kidderminster is a very worthy winner too, Mentions to Campbell’s against Spenny and Alfreton great individual goals, Thommos free kick against Kettering was a hood one too.

Best Player- Hatfield best midfielder we’ve had in a long time.
Mentions to Campbell who’s got to have been involved with at least 25 of our goals we scored this season.
Donowa- Could be our biggest Asset now and is only going to get better which is scary.
Alex Storey- Excellent Centre Half, if we get that organising style Centre Half he will get better, Storey’s made a couple of the best blocks I’ve seen in a football match.
Liddle- Consistent 7 out of 10, does nothing wrong and is a danger when going forward for us

Grade- B+ Alun said when he was announced that this season was a rebuild job and that’s exactly what he’s done, he’s shipped out all the error signings that TW made. We’ve finished in the top 10 had a cup run and we’ve done that without 3 players who were crucial to Aluns plan (Trotman, Holmes and Atkinson). We’ve got 2 of them coming back and with the 5 that he’s after to bring in we could really be up there next season.
Top

My favourite league game was Alfreton away.Our 2nd half performance and the way we all went mental after the 2nd goal was just amazing.
Top

Best game was obviously Walsall away, the away support was fantastic.

Best moment was Wheatley's goal in the same game.

Best player definitely was Hatfield, the midfield driving force that we've been missing for a long time.

Grade B at times we were excellent & at times very ordinary. Far too inconsistent, we never know which Darlo would turn up. But overall a big improvement on the previous season.
Top

Vodka_Vic wrote: ↑
Wed Jun 17, 2020 8:41 pm
My favourite league game was Alfreton away.Our 2nd half performance and the way we all went mental after the 2nd goal was just amazing.

This game was brilliant, it seems so long ago now that I was wondering whether it came from the previous season! But obviously the players wouldn't have played like this under the previous management team.

Liddle was superb.
Mr Singh said this " I'm not expecting to get back any of the money I've already put in, I'm prepared to write it off for the future of the club. I'm not hanging in to make any kind of financial gain in the short or long term - if someone was prepared to come in and take the club off my hands, I'd be more than willing to discuss it"