Disappointing that the purple has not made the final, hopefully we have a sash home and away!

Sent from my Pixel 2 using Tapatalk

On Sunday April 29, 2012 at 10:25 pm, Darlo Cockney wrote:Sadly some people have nothing better to do that invent rumours.

We will be playing at the arena again next season - fact.

Quakerz - if you actually attended games and spoke to people you might actually find our facts, rather than spreading s*** on this board.

Me too. I really thought based on the comments I'd read it would.

Prefer the tone of the orange to the red.
Top

Old Git wrote:Nice I quite like a Shiraz or a Malbec.
By the way not buying your transparent attempt at friendliness. Clearly you overstepped the mark with your comments about Chris Stockdale and the DFCSG Board and you are now trying to pass it off as humour.
Yes you are correct I do not miss a chance to get stuck into you. Simple reason is I think you deserve to be called out as a bully boy.

Think what you like. Everyone else has taken it as a joke, so you’re just making yourself look silly and humourless.

Anyway, about those away kits.....

.... why not let main sponsor Ebac decide that fits in great with their logo?


Isn't that what Coventry did years ago with Talbot as sponsor and the T Shaped shirt design to match sponsor logo and get round rules limiting advertising size on shirts.

"The 'T' was shirt design and nothing to do with sponsor". The version without sponsor name was for when game was shown on TV as at time sponsored shirts were not allowed on TV! 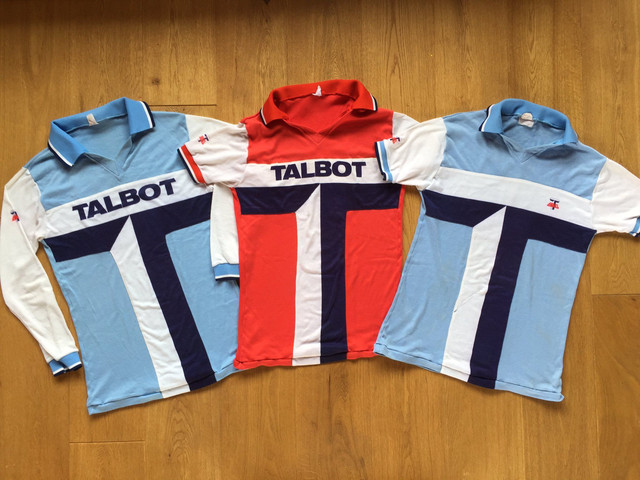 I think their attempt to use the shirt for televised games was scuppered by the FA, who deemed it to still be a sponsor's logo. They had to have a completely different shirt.
Never argue with an idiot: The best possible outcome is that you win an argument with an idiot.
Top

I think their attempt to use the shirt for televised games was scuppered by the FA, who deemed it to still be a sponsor's logo. They had to have a completely different shirt.

Hearing you say this in 2021, it seems bizarre to think that clubs were allowed sponsors on shirts, but not on TV games.

Ironically, given the other thread re tuesday night's shenanigans in the FA Trophy, it was of course Kettering Town who got in trouble with the FA for wearing shirts with sponsors name on -despite FA ban on such kit.
Top

The Freemasons will be sponsoring that one

I think it would look slightly better without the white piping on the sash.

I wanted the purple camo, and broken hoops, but then I also voted remain and didn't vote Tory in any of the last 4 general elections, so used to not getting my way!
Top

The new kit home and away is an outrage. The sash is completely the wrong way round. It should be left to right. Or is it right to left?

Anyway I shall view it as a hooped shirt and if you tilt your head to the left, or is it right, it's 2 big white hoops and 1 small black hoop.