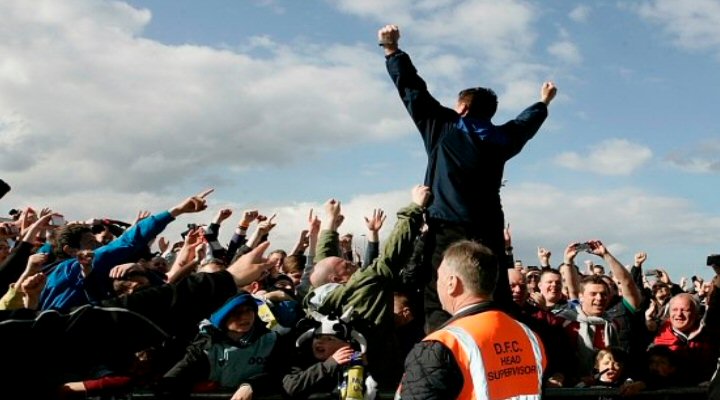 Another week as a Darlo fan and another chapter for our book on how we rebuilt the towns football club from bottom up.

On Sunday we found out the new that Martin Gray had resigned and then hours later was announced as the new manager of York City.

Martin took charge of the playing side of the club over 5 years ago and inherited 2 players.  Significantly backed by the fans money he put together a team who charged up through the divisions.  We all shared some fantastic memories, ones we will never forget.  We will always be indebted to Martin and his coaching team for quickly getting us back up the leagues to where we are now, just one step from where we started.

The cracks started to show after the seat debacle of last season and the writing was on the wall after the fans forum where Martin was quite critical of the club and the way it was being run.  We shall not dwell on the rights or wrongs of the situation but Martins departure was in the best interests of both parties.  Martin is very ambitious and when it comes down to it we all look after number 1.

For the football club we can now press on with the fans owned model which we have.  There are no apparent investors out there so we have got what we have got.  We are not Martin Gray Football Club, we are Darlington Football Club.

Stability is key on the field and performances will need to be given on the pitch to make sure this seasons events have no detriment to our position within the National League North.  Off the pitch we really need to focus on infrastructure.  Lets get these bloody seats and a roof sorted, not just focus on short team gains on the playing side but focus on a long term plan.

It was never going to be 5 years and we are back to where we were pre the 2012 collapse, this rebuilding will take another 10 years or so in my opinion.  There is no rush but obviously as football fans we do like things here and now.  But as a Darlington fan we used to fight relegation most seasons with very little on the success front.

It the fans club yet in the modern day world of the t'internet and social media we quite clearly see divide at times.  I am sure most is just out of frustration but like the team on the pitch, you are more likely to win if we all stick together rather than play as individuals.  We should all be proud of what we have achieved so far, Martin and his team have done a fantastic job and we all thank them for their services. We have created fantastic memories together that nobody can take away from us.  I really can't thank them enough.

They have gone and now we have the opportunity to bring somebody in who buys into the fan owned model at this level of football.  It was an easy ride with Martin at the helm but we used each other.  Martin got himself into the shop window and has a great opportunity at York City, whilst we have been left in National League North with a great set of players who are more than capable of holding their own.